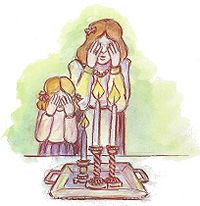 The order of candle lighting

Obligation of a Guest

What should be used for candles?

see Using a light bulb for Shabbat Candles and Havdala

How to Move the Candlesticks from the Table