From Halachipedia
(Redirected from When does Shabbat end?) 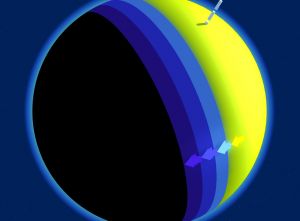 The Talmud has several different statements about when the nighttime begins for all purposes including when Shabbat ends. The clearest statement on the matter is that of Shmuel in Gemara Shabbat 35b; once three medium stars are visible in the sky it is considered night. This time period is called Tzeit Hakochavim, the emergence of the stars. Though, there are multiple Gemaras that comment on the time span between sunset and Tzeit HaKochavim. The Gemara Shabbat 34b records the opinion of Rabbi Yehuda that night only begins after a period of twilight which elapses from shekiya (sunset) for another two thirds of a mil or three quarters of a mil.[1] Additionally, Rabbi Yosi disagrees and thinks twilight is minimal, literally "the length of time it takes to bat an eyelash", though not precisely that amount of time.[2] Finally, the Gemara Pesachim 94a indicates that nightfall doesn't begin until 4 mil after shekiya. There are three main approaches in the rishonim and achronim[3] as how to resolve these statements of the Talmud in a cohesive manner.

Rabbenu Tam[4] held that there are two shekiya's; the first is astronomical sunset and afterwards it is nighttime for korbanot purposes, but otherwise it is still day until the second shekiya, which occurs three and a quarter mil after sunset. Then there is a duration of twilight of Rabbi Yehuda that is at most three quarters of a mil. For all purposes besides korbanot nighttime begins four mil after shekiya. This is also the understanding of most rishonim and Shulchan Aruch. This method would not allow relying on the emergence of stars method because the stars under discussion are subject to interpretation.[5] Those who rely upon that are described below. Rabbenu Tam's approach is subject to further debate as how to understand the time of four mil, whether it is measured in fixed minutes,[6] seasonal minutes (shaot zmaniyot),[7] or astronomical degrees.

The Vilna Goan (Gra)[8] explained that the Gemara Pesachim 94a was merely describing a time of night for when travelers could no longer travel. However, for halachic purposes nightfall begins after the twilight, which is three quarters mil. Similarly, this interpretation is subject to further debate as how to understand the time of four mil, whether it is measured in seasonal minutes (shaot zmaniyot) or astronomical degrees. No one who accepts the opinion of the Gra assumes that it is fixed minutes.[9]

Rabbi Yechiel Michel Tukachinsky[10] disagreed with the earlier approaches that used either time based methods of four mil or three quarter mil. With respect to the Gemara Pesachim he accepted the Vilna Goan's argument that it wasn't relevant to the determination of halachic night. Also, he understood that really Rabbi Yosi's twilight starts slightly later than that of Rabbi Yehuda's twilight. The only method that a person could use to calculate when night begins is the emergence of three stars.[11] To literally look up at the stars and decide when Shabbat is over could only be applied practically by someone who is an expert in this area as there are many preconditions to using this method and their determinations are complex.[12] These include: the stars need to be in close proximity and not spread out,[13] they need to be small stars,[14] the three stars can only be relied upon if the Western part of the sky has darkened to the point that the area right above the horizon is as dark as the area far above the horizon.[15] The best way to apply this opinion is to take the determination of when stars are visible by an expert and then extrapolate based on degrees below horizon to the rest of the world.

According to this position, anything that is stipulated in the Gemara (see below) about the amount of time between sunset and Tzeit HaKochavim is only applicable to Bavel (Babylonia) and Israel during the Tishrei and Nissan equinoxes, not for the rest of the world nor during any other time of the year. The astronomical method uses the time that it takes to see the three small stars in Israel and the position of the sun at this time to extrapolate a calculation for when Shabbat should end for the rest of the world. In Jerusalem, during the Tishrei and Nissan equinoxes, it takes approximately 32 minutes in the winter and 38 minutes in the summer (in the United States and Europe, 50-60 minutes[16]) after sunset to see these three stars in the sky. At this time, the sun has set 8.5 degrees below the horizon. Therefore, Shabbat ends when the sun has set 8.5 degrees below the horizon in every other location in the world at any other time during the year [17][18]

Based on the Gemara's above there are a number of Rishonim that try to reconcile the different statements, the most notable of the opinions being that of Rabbeinu Tam who concludes that there is not one but two sunsets that halacha recognizes. The first of them is the natural sunset, which marks the beginning of the sun's setting. Then, 3.25 mil later, a second, halachic, sunset occurs, lasting for 0.75 mil, after which is Tzeit HaKochavim. The first 3.25 mil, for halachic purposes, is completely considered halachic day as there is still some daylight in the sky[19], while the final 0.75 mil is ambiguous as to whether is considered halachic day or night (Bein HaShemashot) since the light is diminished. The Gemara in Pesachim is referring to the time between the first sunset and Tzeit HaKochavim and the Gemara in Shabbat is referring to the time between the second sunset and Tzeit HaKochavim.

For those who follow Rabbeinu Tam's position, Tzeit HaKochavim and the end of Shabbat occur at a uniform 4 mil after natural sunset for all locales.[20] The only difference among the different interpretations of Rabbeinu Tam's position is how long to define a mil, which has ramifications for how long 4 mil would be and when Shabbat would end.

The other major position that sought to resolve the contradiction in Gemaras was that of the Geonim and the Vilna Gaon (Gr"a) who held that there is only one halachic sunset, which occurs at natural sunset. The 0.75 mil the Gemara was referring to is the time that it takes 3 medium sized stars to appear in the sky, which is nighttime on a Torah level. We are then required to wait longer until 3 small stars appear[33] to appear to end Shabbat. When the Gemara was speaking about 4 mil, it is referring to when all the stars appear in the sky, which does not have halachic significance.[34] This position maintains that Tzeit HaKochavim occurs after 0.75 mil after sunset, long before the 4 mil presented by Rabbeinu Tam.

Many Rishonim and Geonim[35] agree with the opinion of the Vilna Goan including the Ri[36], Rambam,[37] and Rabbenu Prachya.[38] Some say Rashi holds this as well.[39] Many achronim and poskim hold of this approach.[40] Many contemporary poskim state and confirm that the minhag is like the Gra.[41]

The application of the Gra's opinion of 3/4 mil practically is generally understood to be done by degrees below horizon. The reason for this opinion is that it would account for the difference in the places of the world and standardize how dark it is to be considered nighttime. This is the approach of myzmanim.com, Rav Tukachinsky,[42] Rav Schachter,[43] and Rav Belsky[44].[45]