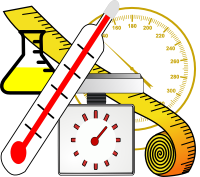 When measuring an amount that would be a stringency to use a larger measure, the poskim have slightly larger measures. They are 1/48 larger than the above measures.[23]