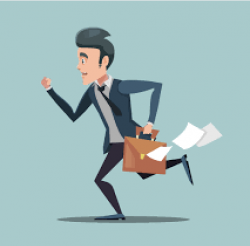 One should not work on Friday afternoon past the time for Mincha.[1] It is debated whether this means 6.5 halachic hours after sunrise (Mincha Gedola)[2] or 9.5 halachic hours after sunrise (Mincha Ketana).[3][4] The reason is debated as well; one opinion holds that it's because we want to prevent one from transgressing the laws of Shabbos if he runs too late, and the other opinion says the reason is to leave time to prepare for Shabbos. While there are various leniencies (mentioned below), a G-d fearing person should do his best to abide by this law and it will do him well.[5] One who unrightfully does not abide by this law will not gain from the work that he does after the time for Mincha on Friday afternoon,[1][6][7][8] either directly or by losing the profit in a different manner.[2]

Leaving with Time to Prepare for Shabbat

Others are Preparing for Shabbos

Finishing a Job Under Compelling Circumstances

Conducting "Business" as Opposed to "Work"