After the woman went to the mikveh and has not yet seen any blood there is time when she is expecting her next period during which she is forbidden to her husband. That day when she is considered to be expecting her period is called a Veset (plural: vestot). If it is established as a pattern (veset kavuah) it is treated more seriously, while if that day isn't established in some pattern there are a few days on which she is considered to be anticipating her period (veset sheino kavuah).[1]

A Woman without an Established Veset Pattern 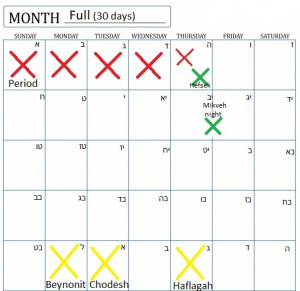 Onah Beynonit on ל, Chodesh on א, and Haflagah of 33 on ג 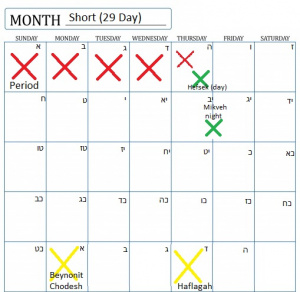 Non-Established Veset for the 29th of the Month

Non-Established Veset for the 1st of the Month

Non-Established Veset for the 30th of the Month 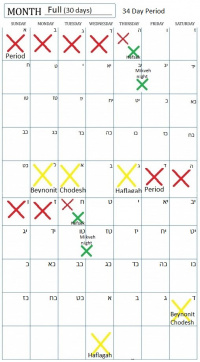 A Woman with an Established Veset Pattern

Day of the Week

Indicators of a Period

Increasing Days of the Month

How does she Check?

How many times does she have to do a bedika?

How to Uproot a Veset

Seeing Earlier than the Veset

When is the veset?

How Long is a Veset?

What is Forbidden during the Veset?

If Her Husband is Travelling

Veset for a Pregnant or Nursing Woman