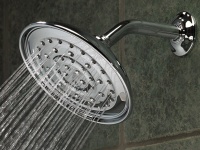 Heating up water on Yom Tov

In the Mishna (Beitzah 2:5), Bet Shamai say that one may only heat up water for washing one’s feet and only to a temperature that one would be able to drink, while Bet Hillel permit heating up the water even as hot as needed to bathe. The Rif and Tosfot (Beitzah 21b) stipulate that Beit Hillel only permitted heating water on Yom Tov for one's hands and feet, but not for one's entire body.

Tosfot (Beitzah 21b s.v. Lo Yicham) writes that Bet Hillel only allows heating up water to a high temperature regarding one’s hands and feet because that’s a pleasure enjoyed by everyone, however, for the entire body it’s forbidden (Biblically) because it’s not considered something which is a pleasure enjoyed by everyone. This is similar to the Gemara Ketubot 7a which stipulates that a pleasure which is only enjoyed by wealthy people isn't considered Ochel Nefesh. A number of Rishonim agree with this explanation.[1]

The Rambam (Yom Tov 1:16), however, holds that the only prohibition involved is the rabbinic prohibition to bathe in a bathhouse. A number of rishonim agree.[2]The Ramban (Shabbat 40a s.v. Ha Ditnan) explains that even though seemingly this rabbinic prohibition should not be extended to Yom Tov because it is permitted to engage in those melachot for Yom Tov, nonetheless, since some Halachic concerns still apply to bathing on Yom Tov, such as squeezing water from one’s hair or towel, the prohibition applies to Yom Tov as well.

Which approach is accepted as halacha?

The Shulchan Aruch 511:2 seems to rule like the Rambam, while the Rama follows the opinion of Tosfot. For a clarification of this point as well as the opinion of other major poskim, see the footnote.[3] The Beiur Halacha 511:2 s.v. Yadav implies that what is considered a pleasure enjoyed by everyone depends on the time and place. (Sh”t Mayim Chaim 1:29 supports this idea.) [4]

Showering with water heated up before Yom Tov

Tosfot who holds that there is a biblical prohibition to heat up water on Yom Tov, also holds that there’s a rabbinic prohibition to bathe in water heated before Yom Tov just like there’s a rabbinic prohibition regarding water heated before Shabbat. Based on this, the Noda Biyehuda OC 24 and Chacham Tzvi 11 forbid immersing in a heated mikveh, even if the water was heated before Yom Tov but they did permit using lukewarm water. Teshuvot Divrei Chaim OC 2:26 says that the minhag is to allow women to immerse even on Shabbat and Yom Tov in a heated Mikvah. Rabbi Akiva Eiger on Shulchan Aruch 307:5, quoted by Bi’ur Halacha 326:1 "Bimayim" permits bathing in hot water even on Shabbat because if not the women would be in great discomfort, and the gezeira wasn't made on situations like those. However, the Rambam holds that it’s permissible to wash one’s whole body with water that was heated up before Yom Tov as long as it’s done outside a bathhouse because there was a rabbinic prohibition not to bathe in a bathhouse on Yom Tov (Bet Yosef 511:2).

Shulchan Aruch 511:2 rules like the Rambam and the Rama rules like Tosfot. Mishna Brurah 551:19 writes that Ashkenazim shouldn’t change the minhag to refrain from washing one’s whole body in water that was heated before Yom Tov. However, Chazon Ovadyah (Yom Tov pg 41) writes that the Sephardic minhag is to follow Shulchan Aruch. Sh”t Mayim Chayim 1:29 agrees.

According to a ruling of Rav Yitzchak Yosef Shlita, in the Diaspora, when Yom Tov falls out on Thursday and Friday and leads into Shabbat, colloquially known as a Three Day Yom Tov, it is permissible to take a shower on Yom Tov as long as the water in the boiler was boiling before Yom Tov even if there is incoming water that will be heated as it enters the boiler. [7] In any event, this ruling does not address the issues of plucking out hairs or squeezing out hair, which are forbidden.

Many major authorities forbid taking a shower with hot water whether the water was heated before Yom Tov or on Yom Tov. However, one may wash one's body one limb at a time with water heated before Yom Tov and one may heat up water on Yom Tov to wash one’s face hands and feet. However, some authorities are lenient and hold that it's preferable to shower on Yom Tov with lukewarm water but it's even permitted to shower with hot water, however, one should not use very hot water. Nonetheless, it's imperative to be careful about certain concerns: