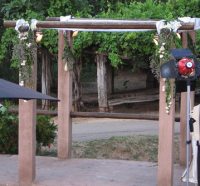 While today's engagements only correspond to dating in a halachic sense[1], there is a process called Kiddushin which is the halachic act of engagement.[2] Once a woman is halachically engaged (mekudeshet), she may not marry anyone else unless she receives a halachic divorce (get) or if her husband dies.[3] If the husband dies without children, in certain cases, there is a mitzvah of Chalitza prior to remarrying.[4]

Giving the Ring and Saying Harei At Mekudeshet Li

Laws of the Ring

Witnesses (eidim) are necessary to observe the Kiddushin process, when the chosson gives the kallah a ring and says “harei at mekudeshet li betaba’at zu kedat Moshe veYisrael.”

Who is a Kosher Witness

The Beracha for Kiddushin (Birkat Erusin)

Suspicious Lineage Due to Bad Middot

Proving Someone Is a Cohen

Child from Cohen Outside Marriage

If Husband and Wife's Names Are Alike