Davening with a Minyan

A person should make a great effort to daven in a minyan because of the tremendous holiness of davening in a minyan and because when one prays in a minyan one's Tefillot are accepted before Hashem.[1] Some hold that there is a rabbinic obligation to go to a minyan and joining is a biblical mitzvah in the enhancement of one's Tefillah,[2] while others hold it is a very important religious value that one should not forgo but not an absolute obligation.[3]

Being Enthusiastic to Go to Minyan

Where to Go to Minyan

What Parts of Davening Require there to Be a Minyan?

What is Considered Davening with a Minyan?

Davening another Shemona Esrei than the Congregation

Starting after the Congregation Started

Davening in an Adjacent Room 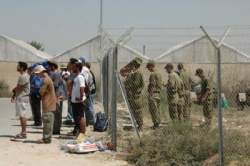 Conditions to do Chazarat Hashatz

Who Counts for a Minyan?

If Some of the Minyan Left Early

Missing a Minyan for Business Purposes

Missing a Minyan for Vacation

Missing Minyan Because One Is Sick

Missing Minyan Because of Learning

Missing Minyan to daven at a More Optimal Time