From Halachipedia
(Redirected from Aravah) 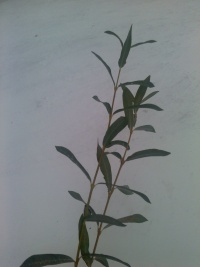 One of the four species mentioned in the Torah to be taken on Sukkot is ערבי נחל which are translated as the leafy branch of a specific type of willow tree. They are described by the torah as willows of the river because most of this species grows by the river.[1]

Signs of a Kosher Aravah

Aravot which lost leaves or dried out