Netilat Yadayim upon Waking Up

From Halachipedia
(Redirected from Netilat Yadayim upon waking up) 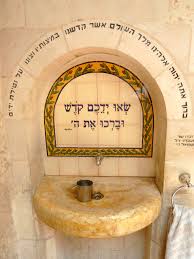 Chazal established that upon waking up a person should wash his hands in the morning prior to davening Shacharit to clean the hands before praying, purify them of any hint of death that comes from sleeping, and prepare ourselves for holiness the way the Kohanim did in the Beit HaMikdash. The details of when and how it should be done are described below:

Netilat Yadayim in the Bathroom

When Should One Wash One's Hands?

What Is Permissible before Washing Hands?

When Does One Need to Wash Hands?

Someone Who Stayed up All Night

Someone Who Got Up in the Middle of the Night

Someone Who Wakes Up Very Early

When to Recite the Bracha

If There is Something on One's Hands