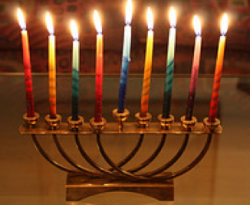 In the time of the second Bet Hamikdash, the Greek kings made decrees against the Jews in order to make them forget Torah and Judaism. They broke into the Bet Hamikdash and defiled it until Hashem had mercy on the Jews and saved them. The salvation came through the Chashmonaim who were victorious over the Greeks and served as Cohanim Gedolim. They returned to the Bet Hamikdash and only found one pure flask of oil which was enough to light for only one day. A miracle occurred and it lasted 8 days. On the day that they found the flask, on the 25th of Kislev, the Rabbis established a holiday, 8 days of festivity and joy, called Chanuka. [1]

Getting benefit from the light of the candles

Who should rely on the household’s lighting?

Should a guest light candles?

Which Chanukia is Kosher and which is preferable

The Brachot of Chanuka Candles