From Halachipedia
(Redirected from Kiddish of Sukkot) 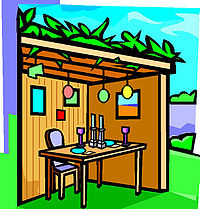 Based on the pesukim in the Torah which read -בַּסֻּכֹּת תֵּשְׁבוּ, שִׁבְעַת יָמִים; כָּל-הָאֶזְרָח, בְּיִשְׂרָאֵל, יֵשְׁבוּ, בַּסֻּכֹּת. לְמַעַן, יֵדְעוּ דֹרֹתֵיכֶם, כִּי בַסֻּכּוֹת הוֹשַׁבְתִּי אֶת-בְּנֵי יִשְׂרָאֵל, בְּהוֹצִיאִי אוֹתָם מֵאֶרֶץ מִצְרָיִם: אֲנִי, ה אֱלֹקיכֶם.- "For a seven day period you shall live in booths. Every resident among the Israelites shall live in booths, in order that your [ensuing] generations should know that I had the children of Israel live in booths when I took them out of the land of Egypt. I am the Lord, your God." [1] there is a positive commandment to sit in the Sukkah for the 7 days of Sukkot.[2]

If one is in the middle of a meal

If One Is Not Eating

Kiddush During the Day

Lighting Candles in the Sukkah

Davening in a Sukkah

Havdalah in a Sukkah

Meetings in a Sukkah