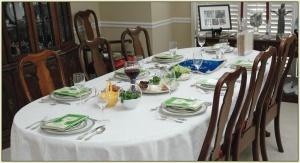 On Pesach, at the Seder, we are required to eat a festive meal, named Shulchan Orech. It is the tenth order of the Seder

Roasted foods at the Seder