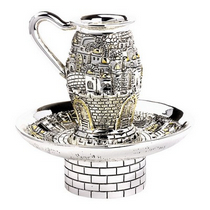 There is a mitzvah to wash one's hand after a bread meal before Birkat HaMazon. This mitzvah is called Mayim Achronim. The rabbis loosely derived it to a pasuk “VeHayiteem Kedoshim” - we should be holy. Additionally, Mayim Achronim was instituted in order to prevent Sedomite salt from getting into one’s eyes, which could potentially blind oneself. [1]

The basics of the obligation

Who is obligated in Mayim Achronim?

Water that is fit for Mayim Achronim

Requirement of actually pouring the water

How the washing is done

If one forgot Mayim Achronim